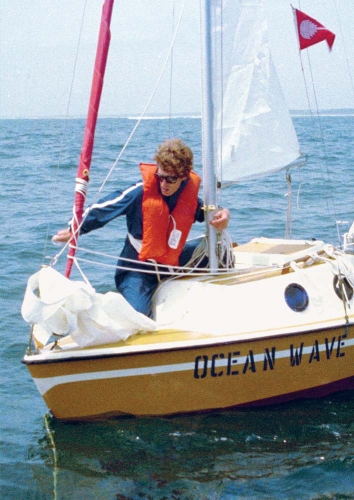 On July 9, 1975, Bas Jan Ader departed for what he called “a very long sailing trip”—a several month journey from Stage Harbor, Massachusetts, to the southern coast of England. The crossing was undertaken as part of In Search of the Miraculous, an artwork scheduled to be exhibited at the Groninger Museum in The Netherlands. On April 18, 1976, Ader’s boat the Ocean Wave was found unmanned and partially submerged 150 miles off the coast of Ireland by the crew of the Eduardo Pondal, a Spanish fishing trawler. The Dutch artist’s boat was taken to La Coruña for investigation. Days later, the boat was stolen. Ader’s body was never recovered.

Discovery File 143/76 documents the mysterious fate of the 13 ft micro yacht at the center of artist Bas Jan Ader’s ill-fated attempt to cross the Atlantic Ocean. For the book, artists Marion van Wijk and Koos Dalstra compile years of research into the still unsolved mystery of Bas Jan Ader’s disappearance. The Spanish police report documenting the boat’s theft is reproduced in facsimile alongside a translation into English. The volume also compiles additional documentation produced during the editors’ investigations including transcriptions of interviews with Ader’s widow Mary Sue Anderson, curator Charles Esche, and family members of the owner of the Eduardo Pondal. - New Documents