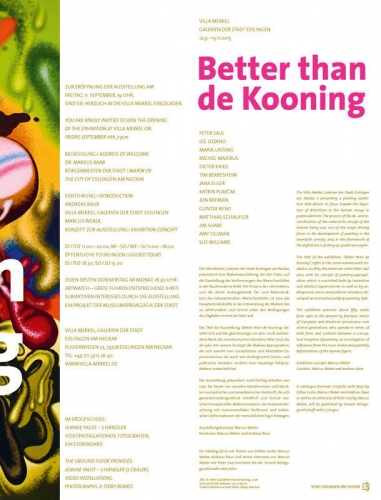 The Villa Merkel, Galerien der Stadt Esslingen am Neckar, is presenting in the autumn of 2015 an extensive painting exhibition that directs its focus toward the depiction of distortions in the human image in postmodernism. The process of the de- and reconstruction of the naturalistic image of the human being was one of the major driving forces in the development of painting in the twentieth century and, in the framework of the digital era, is picking up speed once again. The title of the exhibition, Better than de Kooning, refers to the same-named work created in 2008 by the American artist Peter Saul who, with his concept of painting-appropriation, which is nourished both by Surrealism and Abstract Expressionism as well as by underground comics and political caricature, developed an innovative politpop painting style. The exhibition presents works by fourteen artists of European and American provenance over several generations who operate in terms of both form and contents between a conceptual reception of painting and an investigation of influences from the mass media.

At the same time, the exhibition will establish a bridge to caricature, comics and the animated films of the nineteenth and early twentieth centuries, and thereby illuminate the beginnings and interconnections of this thematic area.

Bringing together more than fifty paintings, the exhibition Better than de Kooning will extend over the entire upper floor of the Villa Merkel and retrace the interaction between painterly deformations of the human figure and mass-media images from 1961 to the present. The works on display will thereby enter into correspondence with an extensive wall collage consisting of caricatures, panels from comics and film stills.

A catalogue (German/English) with texts by Esther Leslie, Marcus Weber and Andreas Baur, as well as an interview of Peter Saul by Marcus Weber, will be published by Snoek Verlagsgesellschaft mbH, Cologne.