Anna Meliksetian and Michael Briggs are pleased to present “Exquisite Terribleness”, an exhibition of new works by Los Angeles based artist Todd Gray.

Gray’s works are comprised of photographs gathered from his own archive and recontextualized via their juxtaposition with one another and the use of antique frames as a structuring device. The current body of work stems from Gray’s artistic investigation, begun in 1989 with Alan Sekula at Cal Arts for his MFA thesis exhibition, which focused on Gray’s extensive archive of Michael Jackson photographs he took during his time as Jackson’s personal photographer in the 1980’s. Recent conversations with artist Carrie Mae Weems and film-maker John Akomfrah on the subjects of history, the archive, and the legacy of the late cultural theorist Stuart Hall, led to a reinvestigation of the subject.

In this latest body of work, the fourth examination of this archive, Gray has re-imagined and literally re-framed the photos of Jackson together with his documentary work from Ghana, where he maintains a studio, using weathered, antique frames that once hung on the walls of homes in South Los Angeles.

Gray resists the viewer’s desire to see a cohesive and complete likeness of Jackson, showing instead detailed fragments of his body, and juxtaposing them against images of African people and Ghanaian architecture. The framed photos, collaged on the wall, overlap and stack on top of one another, scattered high and low, creating a visual cacophony of low relief, photo-sculpture. This resulting work is autobiographical, and uses the language and signifiers of popular culture and spectacle to draw in the viewer, blurring the boundaries of pop culture and fine art, aesthetics and rational structure and refusing to collapse into a simple binary opposition. 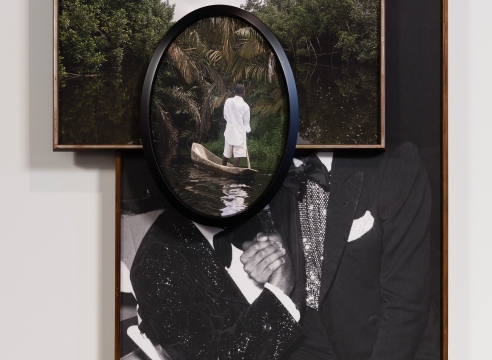